This article or section is outdated. You can help the Official WildStar Online Community by updating it. Please keep in mind that some of the information or images may not be accurate or relevant to the current version of WildStar, the WildStar Online website, or the article subject. 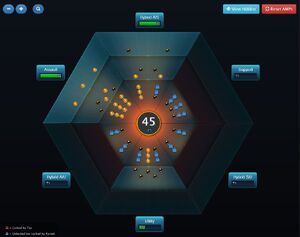 AMP stands for Advanced Modification Protocol and is a class customization feature of WildStar. AMPs supply passive upgrades and "procs" that players are able to spend points on, to customize their character for areas such as Assault, Utility, or Support, and their combinations.

Using a constellation-style grid, players are able to spend points to unlock passive upgrades. Players receive 1 AMP point per level to be spent by clicking the upgrade they wish to buy. Most upgrades beyond Tier 1 require more than 1 AMP point to acquire, which makes it necessary to save and plan on what you really need.

The AMP page is portrayed and divided into six different trees:

Many AMPs need to be unlocked before points can be assigned to them. AMPS are inventory items which can be acquired in one of three ways.

Right clicking on an AMP in the inventory will 'use' the item and unlock the relevant AMP in the AMP tree.

In addition to passive abilities, AMPs are able to unlock three usable abilities for each class. There is one for assault, support and utility.

For the source of AMPs, including vendors and NPCs, visit the below links:

As your character progresses from Level 1 to Level 50, you will automatically gain 45 AMP points. It is possible to gain an extra 10 AMPs with AMP Power Upgrade's. There are different methods of obtaining these:

The above points can only be used once, however there are 3 more options to gain more AMP Power Upgrades.

The Bind on Use AMP Power Upgrade's can be sold to other players, or purchased from other players via the Communities Exchange.

Retrieved from "https://wildstaronline.fandom.com/wiki/AMP?oldid=39534"
Community content is available under CC-BY-SA unless otherwise noted.