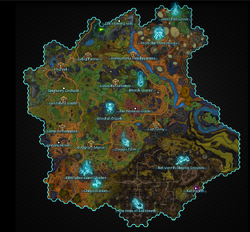 Auroria is a region where Hycrest is located. The area is responsible for providing food to all Dominion territories, a veritable breadbasket of fertile ground, great weather, and open fields for raising livestock.

There is a great deal of turmoil in the region: the plague outbreak near Hycrest, the Osun of Kel Voreth in the south, Darkspur Cartel's take over of Clugg's Farm to house their illicit operations, and numerous raids from a local Skeech tribe in Gildgrass. The neighboring DRED laboratory is also occupied by the Exiles' military and scientific expedition who would use it to gain new technologies and a foothold against the Dominion in Olyssia. In addition to their presence in the DRED laboratory, their Aurin allies, a group named "Hivestrike Grove," planned to tame the nearby Buzzbings as weapons near Protostar's Honeyworks.

It also houses Protostar's honey production facility, cubig farm, and a quarry. The company also provides farming equipment for the nearby lowborn farmers, especially Gravitic Destabilizers in Kestus' Bingberry farm. Later, the Protostar quarry is confiscated by the authorities of the Dominion and offered it to the local Freebots collective. Despite the outcome of their mining facilities, Protostar continue to trade with Dominion and held on to their honey production facilities.

The region contains a rare mineral called Terrenite, which provides stronger protection by preventing cracks and sealing off fractures at the price of weight. Due to Terrenite's impracticality in protecting the armor wearers without sacrificing mobility, the mineral was used in walls of fortresses and cities.

Eldan ruins can also be found in the area, though it is notable for being more dangerous than helpful. Of the two exo-sites, one contains highly aggressive augmentors that produce even angrier augmented, and the second is a toxic field infested by terminites.

Retrieved from "https://wildstaronline.fandom.com/wiki/Auroria?oldid=38230"
Community content is available under CC-BY-SA unless otherwise noted.