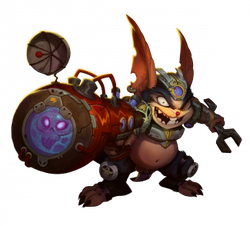 The Chua are a race of skilled technologists. Highly intelligent, competitive, industrious, and gifted with inherent technological insight, the once-primitive Chua experienced extremely rapid industrial transformation of their civilization thanks to cultural intervention by the Mechari long ago. The Mechari believed the Chua would be a boon to the empire, and time proved them right.

The Chua are furry, bipedal rodents with heavy tails and large, hairless ears. There is no visible difference between male and female Chua to a non-Chua observer, so members of other species tend to refer to the entire species as male. According to an Ikthian science report, a genetic scan is required to determine gender.

The Chua hail from Bezgelor - a small planet located in a binary star system. Bezgelor also has two nearly identically sized moons, Pergo and Pago, orbiting opposite sides of the planet. As a result of the rapid technological development of the Chua, the once verdant and lush Bezgelor has become a barren wasteland, stripped of all its plant, animal, and mineral wealth.

Chua communities are called collectives. A traditional Chua collective typically contains roughly 30 to 40 adult Chua, and 20 or so apprentices known as minions. A Chua collective is a tight-knit community built around the achievement of common goals - mainly industrial pursuits and technological research. To continue their work and ensure the proper extension of their research, the Chua have developed a system of apprenticeship by which their young are assigned to prominent members of the collective for mentorship (and serve as free minion labor).

Most members of the collective are expected to participate in its defense - with the exception of the overseers and the inventors, who are considered too valuable to lose in battle and are often hidden away in the overseers' residence. When defending the collective, Chua usually use technological items and weaponry, depending more on their brains than their brawn.

The Chua are a highly intelligent and technologically proficient race with a twisted sense of humor. The average Chua enjoys watching others suffer, and they are highly competitive with each other and everyone they meet. They often play cruel and violent pranks on others, including their allies, making them total sociopaths, though brilliant (if utterly callous) scientists.

If Chua had a religion, it would be Science. The entire species has a great reverence for technology, research, and knowledge, which is why most of them work for the Royal Collegium or DRED. One of their most famous expressions, "Cozmotronic!" comes from the Cosmotron, a device the Mechari ambassadors had given the Chua's ancestors to teach them simple engineering principles.

Chua are extremely competitive, very willing to one-up their fellows in a variety of (often lethal) ways.

(Lack of) Sanctity of Life Edit

Chua have very, very, very little regard for life. Death and grievous injury are a fact of everyday life for them, happily accepted and doled out in equal amounts.

The reasoning for this might be the Chua's rapid and large reproduction, their competitive nature, and the conditions of their homeworld of Bezgelor. With a never-ending supply of Chua to replace anyone who has died or been incapacitated, preservation is the last thing on their minds.

"Doctor Gozo: See that button? Very important button. Don't touch.Lord Fancypantsington: Nonsense. All of this belongs to Emperor Myrcalus, and I will touch whatever I please.

Lord Fancypantsington: I have the Emperor's orders to inspect this facility, and inspect it I shall. Now leave me be.

- Excerpted from "Gozo's Laboratory of Murderous Mayhem," a long-running holo-comedy that's number one on Bezgelor.

Some female Chua are voiced by Cree Summer, who voices many of the Exile females. 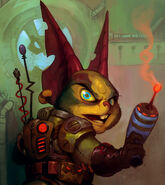 Final minutes of winter beta in Illium. Chua Brigade
Add a photo to this gallery

Wildstar - Emotes
Emotes
Add a photo to this gallery

Retrieved from "https://wildstaronline.fandom.com/wiki/Chua?oldid=41197"
Community content is available under CC-BY-SA unless otherwise noted.