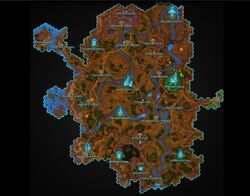 Located in Olyssia, Deradune is the low level zone that is reached after completing Crimson Isle. The initial quest hub is Bloodfire Village located within the upper left corner of the zone.

The Deradune region of the planet Nexus has been granted to the Draken people as a hunting ground on the Dominion's new capitol world - Emperor Myrcalus publicly acknowledging the great debt the empire owed to the might of the fierce warrior race. A hot, dry savannah populated by dangerous predators and unusual plant life, it is a perfect place for the ferocious Draken to engage in their ancient hunting traditions. The central settlement in the region, Bloodfire Village, is ruled by Clanlord Makaza - an honored veteran of dozens of battles against Exile mercs. Though Deradune is Draken territory, it is also home to many Chua, who welcome the freedom to experiment in a dangerous environment, along with smaller numbers of Cassians and Mechari.

The Feralplain Collective is where the Chua researchers of Deradune make their base of operations. Once a player reaches level 10, they may visit this settlement and learn about Tradeskills.

Inhabited by hostile natives and dangerous alien organisms, Deradune is a savage territory that has been claimed by the Dominion. With sweeping savannahs, rugged mountains, and exotic floating trees, Deradune is both beautiful and deadly - the perfect place for bold galactic adventurers seeking new challenges on planet Nexus.

Drawn to its untamed vistas and vicious wildlife, the ferocious Draken of the Bloodfire Clan have established a village on the eastern coast of Deradune. In order to test the mettle of his people, the battle-hardened Clanlord Makaza has called the Great Hunt - an ancient Draken tradition that culminates in the primal ritual known as the Bloodfeast. The Great Hunt is open to anyone who wishes to prove themselves to the clan, and adventurers from across Nexus have come to here to face off against some of the most dangerous creatures in the galaxy.

To offer an even greater challenge to his mightiest hunters, Clanlord Makaza has transported in wondrous and fearsome creatures from across Nexus, including the terrible cybernetic monstrosity known as Metal Maw. A deadly product of Eldan augmentation technology, Metal Maw is being held in a massive cage - but it is only a matter of time before the raging beast breaks free of its prison.

To the north of Bloodfire Village, the terrain gets more rugged and mountainous. Inhabiting the sheer cliffs that overlook the savannah is the Bloodtalon Brood of the barbaric Falkrin - a wild, winged race indigenous to planet Nexus. Having lived in Deradune for thousands of years, the aggressive Falkrin warriors are infuriated by the Dominion’s encroachment on their territory, and a conflict between the two looms dangerously on the horizon.

At the southern end of Deradune there is a bubbling tar pit surrounded by the massive skeletal remains of long-dead creatures. Rumors have surfaced that an ancient Eldan exo-lab is located somewhere nearby, attracting a number of curious scientists and daring explorers who hope to find its location. Just above the tar pit are the sacred burial grounds of Clan Bloodfire, where the remains of fallen Draken warriors are interred. Normally these grounds are quiet, but lately guards have reported seeing strange figures creeping around the graves at night, whispering strange and ominous incantations…

Clanlord Makaza
Clanlord Makaza is the leader of the Bloodfire Clan. Once a decorated soldier in the Dominion Legions, Makaza now rules over his people as they face the dangers of Deradune. Out of respect for the ancient traditions of his homeworld, Makaza has recently called for a Great Hunt - and has commanded hismost skilled huntresses to reward those who fight with bravery and skill.

Huntress Kezzia
Kezzia is the most deadly huntress in Clan Bloodfire. As Clanlord Makaza has just recently called a Great Hunt, Kezzia has been tasked with ensuring that all participants are worthy. A brash and fearless warrior, Kezzia revels in the thrill of the hunt, and often finds herself fighting alongside those who have accepted the challenge of the ancient Draken ritual.

Agent Lex
As part of the Imperial Corps of Intelligence (ICI), Agent Lex has been sent to Deradune to seek out traitors and spies. Known far and wide for his deadliness, Lex was carefully engineered by the Central Axis of the ICI to serve as her eyes and ears in the field. Having recently captured an Exile spy on the savannah, Lex is looking for any information that will shed light on what the spy and his companions are doing there.

Falkrin
The Falkrin are a fierce race of powerful avian humanoids that dwell in the mountains and cliffs of planet Nexus. Primitive, proud and barbaric, the Falkrin are highly territorial, and will attack anything that wanders too close to their perches. Their origins are shrouded in mystery, but they appear to be native to Nexus.

Moodies
Moodies are a species of primitive sentients found only on planet Nexus. Their culture is dedicated to the creation and wearing of large decorative masks which appear to represent iconic emotional states. Moodies shamans are capable of simple but powerful necromancy – a practice that is considered blasphemous to the sacred Blood Covenants of Draken religion.

Metal Maw
The creature known as Metal Maw is a powerful cybernetic monstrosity, a fusion of advanced biological engineering and Eldan augmentation technology. Having been captured by Dominion hunters, the beast has now been brought to Deradune to serve as the ultimate challenge in the Great Hunt.

Retrieved from "https://wildstaronline.fandom.com/wiki/Deradune?oldid=41196"
Community content is available under CC-BY-SA unless otherwise noted.