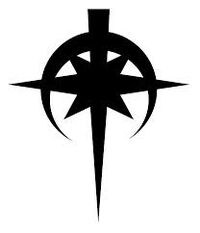 The Dominion are one of two player factions in WildStar, and who share Illium as their beginning capital city. The races in the Dominion include Cassian, Draken, Chua and Mechari. See also Exiles.

The Dominion is a powerful galactic empire established on Cassus 1600 years ago. The Cassians had made advances in technology and space travel, thus catching the eye of the Eldan's mechanical servants, the Mechari. The Mechari took this information back to the Eldan home-world of Nexus. The Eldan sent the Mechari back to Cassus in a fleet of hyper-advanced starships and were met by the awestruck Cassus leaders.

The Mechari demanded that the legendary Cassian Sword-maiden Tresayne Toria journey with them to Nexus - and in return the Eldan would provide the Cassians a gift of immeasurable value. Refuse and the consequences would be dire. For the sake of her people, Tresayne agreed and was never heard from again.

Several years later, the Cassians received their gift in the form of a half-human, half Eldan hybrid named Dominus who bore gifts of Eldan technology for the people of his mother's home-world. He told the Cassians if they would swear allegiance to him, then together they would rule the greatest empire the universe has ever seen. The Cassians agreed and the Dominion was formed. In the years since then, the Dominion have slowly taken control of the galaxy through whatever means necessary.

The races that currently make up the Dominion are Cassians, Draken, Mechari and the Chua. The Dominion home-world is Cassus but since their leader had come from Nexus, they believed the newly discovered planet Nexus to be property of the Dominion and that it represents the fulfillment of an ancient destiny.

Before there was the Dominion, there was the Cassian Commonwealth, a democratic organization advocating complete equality for all of its citizens, no man above nor below his fellows. According to Tresayne Toria's journal in Wilderrun, the Cassian Commonwealth was rife with food shortages and conflict between member states. Despite the harsh condition of Cassian Commonwealth, it managed to make progress in scientific research and space travel. On the fateful day, the Eldan noticed the technological progress of Cassians and sent the Mechari to offer them with gifts of technology in exchange for a Swordmaiden named Tresayne Toria. Many years later, Dominus the Halfblood came to Nexus with Eldan technology and was crowned as the first Emperor of the newly formed Dominion, while the Commonwealth was presumably dissolved to make room for it. 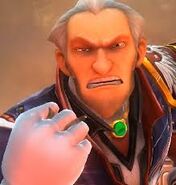 Malvolio Portius of the Dominion 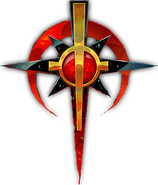 Dominion emblem
Add a photo to this gallery

Retrieved from "https://wildstaronline.fandom.com/wiki/Dominion?oldid=39751"
Community content is available under CC-BY-SA unless otherwise noted.