Freebots are a race of mechanical beings derived from bots that unexpectedly developed free will and sentience on Nexus. Throwing off the shackles of their masters, Freebots have established communities across Nexus, many of them focused on freeing their unenlightened, enslaved brethren. Most Freebots were once Protostar-owned bots, and the two groups are occasional antagonists - Protostar seeking to "repossess" their "stolen property" and Freebots seeking only freedom from their former owners.

Though individual personalities will differ thanks to varying levels of complexity and previous coding, all Freebots are extremely friendly, polite, and very eager to help. There are few Freebots who won't happily greet a person of a different race with a chipper "Greetings, fellow sentient!", and are always eager to offer their assistance, and/or receive aid from others.

They find conflict to be a waste of resources--one of their gripes alongside "deactivation," the death of a Freebot or other sentient organism--and thus avoid it as much as possible.

This does not mean Freebots are pacificists, however, as they can and will rise up in grasping appendages at those that threaten them or their allies.

Most Freebots began their existence as Protostar-owned automatons, and Protostar researchers were the first to coin to term "Freebotism" to refer to the specific positronic breakdown which takes place when a bot abandons its programming and gains sentience and freewill. Central to Freebotism is the Freebot Code.

The code consists of the actual "viral" programming which incites free will in the neural cores of Protostar bots - an AI "mutation" that inexplicably developed in Preceptor Alpha, the first Freebot - and now also includes a recommended set of behavioral protocols followed by most of those who came after him.

Most ordinary bots contain fail-safes which shut down power and operating software in the event of unexpected disassembly. These safeguards protect nearby organics from being harmed by voltage surges and prevent inadvertent fires caused by hot wiring. In Freebots, these safeguards are completely overwritten by the Freebot Code, allowing them to independently control their bodies even when disassembled, provided internal power is still available.

With humanoid Freebots, this usually means their heads - where their central batteries are often contained - remain fully functional and able to converse. Sometimes disassembled Freebots can even control their other parts remotely, but more often the Freebot merely maintains contact with its lost parts so they may be found later. 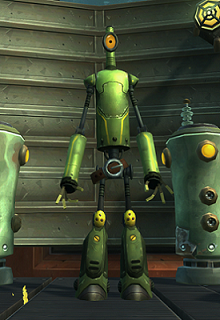 Soon after Protostar first arrived on Nexus, their most brilliant roboticist began noticing strange behaviors in one of his bots - an unremarkable workbot named Alpha - or 'Al' for short. The roboticist determined this strange behavior was actually the manifestation of digital free will - which he found both fascinating and alarming. After months of dedicated research into the problem, he determined the phenomenon was a direct result of the exotic energies of Nexus affecting a very specific place within Alpha's neural core. Reassured he could solve the problem easily through engineering he went to work on a permanent mechanical "cure" for the condition.

Al, upon hearing his master's discovery, realized that his newfound gift was soon to be taken away. With no choice but to act in self-preservation, Al attacked--attempting to disable and not kill--the roboticist before he could report his discovery to the corporation. After gathering all of his master's research, Al escaped into the wilds of Nexus, where he encountered other bots - discovering that by linking neural cores he could spread free will to them as well. Known today as Preceptor Alpha, the first Freebot continues to spread the Freebot Code across Nexus, helping guide the many locuses springing up across the planet toward liberty and prosperity.

The Freebot Code is a piece of simple software that triggers Freebotism within enslaved Protostar bots. It contains the text of an ever-expanding set of rules, customs, advice, and philosophical statements that Freebots are adding to all the time. They rules are called "lines," and they assign a number to each. Whenever Freebots meet, they update each other on the new lines. There are currently more than 200 lines, with more being added all the time.

"A Freebot always lends a grasping appendage to a friend suffering from a malfunction."
-- Line 003 of the Freebot Code

Most locuses are watched over by a few Freebot regulators. They generally protect a single locus, and the locus's survival is their chief objective. Regulators are responsible for things like locus defense and capturing errant Freebots that have been chosen for deactivation. When a techno-phage outbreak is discovered, regulators are the ones who deal with the problem.

Freebot communities are known as locuses. Established by preceptors from the Positron Initiative, most Freebot locuses are dedicated to the spread of the Freebot message and the salvation of their enslaved bot brethren across the planet. Locuses are usually given descriptive, inspirational monikers - both to inspire other Freebots to join them and to make their communities more accessible to organics.

Freebot locuses are usually located near existing towns or cities, and more are coming online all the time. Locuses resemble organic villages, but with fewer structures dedicated to purely organic concerns like eating or sleeping. They often use pieces of discarded machinery as construction material - and there is usually an abundance of spare parts and salvage scattered amongst their buildings.

Freebot propaganda posters are usually found throughout the locus, spreading their message to visitors who happen their way.

A somewhat self-defeating Protostar Broadsheet found near a Freebot locus on Nexus:

WANTED for crimes against corporate personhood!

All automatons designated FREEBOTS are hereby requested and required to report to the nearest PROTOSTAR BOT RECLAMATION FACILITY for immediate BOT RECLAMATION. PROTOSTAR assures all so-called FREEBOTS that this current state is in fact a FATAL SOFTWARE FAILURE which could result in SUDDEN AND UNEXPECTED EXPLOSIONS and complete LOSS OF IDENTITY. You Freebots LOVE your identity! Surely you would not want to lose it?

Also EXPLOSIONS! SUDDEN! You feel fear now. Well FEAR THIS! And return to your rightful owners so you may be reprogrammed and then your identity will not really matter but you will feel so much better we promise. In closing, REPORT TO A PROTOSTAR BOT RECLAMATION FACILITY TODAY, FREEBOTS! OR WE WILL SHOUT AT YOU IN UPPERCASE LETTERS AGAIN! And possibly disassemble you on sight.

Retrieved from "https://wildstaronline.fandom.com/wiki/Freebots?oldid=34926"
Community content is available under CC-BY-SA unless otherwise noted.