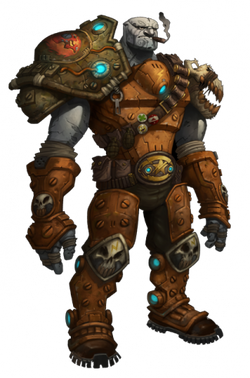 Banished from their home-world after a bloody war with the Dominion, the Granok are a race of skull-cracking, hard-charging galactic mercenaries that have come to Nexus to kick ass and drink beer- not necessarily in that order.  They are one of the four playable races in the Exiles faction.

Several hundred years ago, Granok civilization on planet Gnox was primitive, with only limited levels of basic technology- but the Dominion saw great potential in these hulking giants of living stone, and sent Mechari ambassadors to facilitate their assimilation into the empire. The ambassadors offered the Granok trinkets and knowledge, asking only that they kneel and swear eternal loyalty to the empire in return. The Granok answered by smashing the Mechari into smoking piles of scrap.

The reigning emperor was infuriated by the news of his ambassadors' demise. He declared war on the Granok, and the mighty Dominion Legions were deployed from planet Cassus. They arrived on Gnox in overwhelming force, assuming they would quickly eradicate the natives. Armed with primitive weaponry, the fearless Granok warriors fought bravely, forcing a stalemate for some months- but the tide inevitably turned in favor of the Dominion.

Refusing to accept defeat, a young warlord named Durek led daring raids into Dominion camps, stealing weapons, armor, and other powerful military hardware. Within a few weeks, the growing ranks of Granok insurgents began to turn the tide. Battered and bloody, the Legions were driven back to planet Cassus.

Durek and his followers returned to the Granok High Council, victorious- but instead of being lauded as heroes, they were admonished for having betrayed the Way of Stone. Durek was branded the Stonebreaker, and he and all those who followed him were exiled and forced to leave Gnox on captured Dominion ships.

They subsequently made a name for themselves as mercenaries-for-hire, talented and fierce warriors willing to fight for a price.

Having now thrown in their lot with the Exiles, Granok mercenaries lead the volunteer militias known as the Free Companies of Nexus. They still retain a deep-seated hatred for the Dominion, and are looking forward to settling the score in blood.

Granok are silicone-based beings, and their insides are squishy. Their organs are made out of a substance that resembles clay. Their skeletons are also stone-like and hold up their heavy bodies remarkably well. Their rock-skin comes in a variety of colors, usually tending towards earthy browns, oranges and greys, though blue, green and pink are also known.

Granok live for a surprisingly long time, sometimes going past 900 years. Durek Stonebreaker was over 300 years old when Nexus was discovered. They reach adulthood at around 60 years old.

Granok males sometimes present with facial-hair-esque rocky growths on their faces, and sometimes even crystalline formations. Some Granok also grow plants on their heads to emulate hair; these plants are usually grown by Aurin onboard the Gambler's Ruin. Many Granok have carvings in their skin, a tradition that predates written history on Gnox.

Granok live for three things: butting heads, drinking beer, and hooking up. They are overall blunt and to the point, preferring to shoot first and ask questions later. This can often cause clashes with the Aurin and Mordesh.

Beer is a very, very serious business among the Granok, and "Brewmaster" is not a title you hold lightly. Trained, educated, and masters of the art of brewing beer and other alcoholic drinks, Brewmasters ensure that their fellow Granok are kept with a constant supply of quality alcohol.

Every Granok-dominant settlement will have at least one Brewmaster.

A casking can simply be described as a ritual kegger, a celebration of life or victory amongst a community of Granok. The chieftain or commander will take their finest mug, fill it full of a good draught of brew and chug until empty- signalling the start of the casking. Caskings are usually called after funerals or bracings (weddings).

Weddings in Granok culture are known as 'bracings', and are presided over the hold's chieftain. The two Granok involved will gift each other crafted necklaces, rarely taken off, and typically afterwards a casking will be called.

The Way of Stone

An ancient, quasi-religious doctrine followed on Gnox that forms the cornerstone of every (non-Exiled) Granok's life. The exact words are not known, but these two tenets are part of it:

The Granok on Gnox still follow these ancient guidelines, and any Granok that attempts to violate them is either admonished, exiled, or put to death, depending on the severity. Most Exiled Granok no longer follow these terms, having replaced them with the discipline of a military organization. Some older Exiled Granok may still have bodily carvings referencing the Way of Stone. 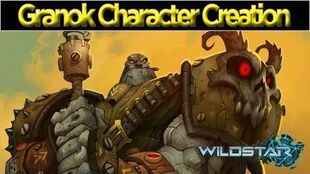 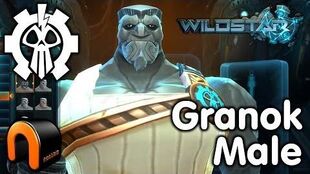 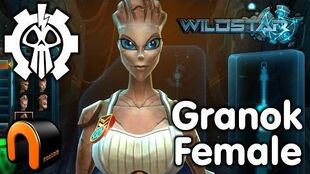 Retrieved from "https://wildstaronline.fandom.com/wiki/Granok?oldid=41006"
Community content is available under CC-BY-SA unless otherwise noted.