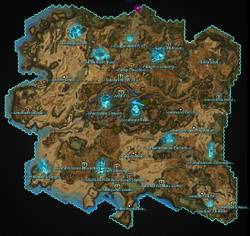 Dry, dusty Malgrave is one of the more sparsely settled regions of the remote Isigrol continent. The region is a wild frontier dominated by aggressive Falkrin broods of Thunderstrike Fortress waging Osiric's war against all offworlders. Fearless or clueless, the Protostar Corporation has set up shop right next door to the Falkrin, confident their clones can be economically replaced if necessary.

Among scattered Lopp trade settlements and scattered Pell Disciples of Air tribes, the forces of the Dominion and Exiles do battle over the relic-strewn desert. The west side is dominated by the Dominion, while the eastern side is under loose Exile control.

Recent rumors that have attracted the attention of two of the most famous explorers in the galaxy - Lady Artemis Zin of the Dominion and Dorian Walker of the Exiles - claim the ancient Eldan artifact known as the Elder Cube may be hidden in Malgrave. Should it be found, the secrets it contains could tip the balance of the war.

Scans of the enormous skeletons and skulls that litter the dry landscape of Malgrave reveal that these gigantic creatures share a nearly identical genetic profile with the smaller Dreg individuals which dwell in the region. It seems that "Dreg" is as much a type of creature as a specific species, with every individual comprised of a genetic soup of sorts - a clear sign of ancient Eldan experimentation.

The town of Gravestone in the Malgrave region appears to be heavily saturated in residual primal life energy, likely left behind by the deaths of so many enormous creatures in Eldan experiments long ago. When the bandits led by the nefarious Black Bret laid siege to the town not long after Exiles began settling Nexus, the conflict soon spiraled out of control - and between botched hostage situations and bandit infighting, the body count skyrocketed until nearly everyone involved was dead. Due to residual energy, however, this has caused many primal echoes, common called "specters," to remain in the abandoned town. These specters retain the motivations they possessed in life, meaning the ghostly bandits, powered by primal energy, remain a very real threat to unsuspecting visitors.

The blooming hellrose of Malgrave is one of many varieties of Nexus plant life which can spontaneously combust to defend themselves. Like the fiera flowers and cinderblooms, they are generally immune to extreme heat. This defense mechanism can even be triggered by typical scan frequencies.

The loose soil in the region can also conceal lost technology and even Eldan constructs, which may prove beneficial or dangerous.

Scan data indicates the Pell tribes and Falkrin broods in Malgrave tend to give each other a wide berth, despite their shared worship of Osiric, the Primeval of Air. There is little genetic residue of either species having ventured into the others' homes, as one would expect if they were in conflict. If anything, the Pell see the Falkrin as living embodiments of primal air - and given that, they have maintained a respectful separation. The Falkrin, on the other hand, seem to consider the Pell little more than typical parts of the environment, and pay them no more heed than they would wild animals. But both are more than happy to oppose anyone Osiric declares to be enemies.

The proximity of primal air sources in the Malgrave region combined with the extreme temperature variations of a desert environment have resulted in numerous dust devils roaming the area. Although they resemble ordinary meteorological phenomena, these dust devils maintain their cohesion for far longer than would be possible via natural means.

Scans indicate this is due to the dust devils themselves becoming infused with raw primal energy, which causes them to take on characteristics typical of living creatures.

Retrieved from "https://wildstaronline.fandom.com/wiki/Malgrave?oldid=38239"
Community content is available under CC-BY-SA unless otherwise noted.