This article is a stub. You can help the Official WildStar Online Community by expanding it. 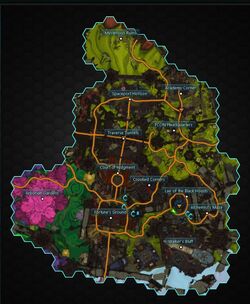 Thayd is a zone in the Alizar region, in the Nexus, and is the main city of the Exiles. Much like the faction that lives within, the city is a hodgepodge construction of whatever the Exiles could find, crammed inside the ruins of an ancient Osun city. Personality brims from around every corner, each race carving out a district with their own personal flair.

The ancient, partially ruined city of Thayd is believed to have been built not by the Eldan, but by the giant Osun race, many of whom now inhabit the area around it. Though the history of the city is known only through fragments of ancient inscriptions, it is believed that Thayd was a capital of sorts for the giants, and was nearly destroyed in a massive cataclysm that led the Osun to abandon the place. Currently, the Exiles have taken over, and use Thayd as a well-fortified headquarters for FCON's efforts in the Galeras region.

Retrieved from "https://wildstaronline.fandom.com/wiki/Thayd?oldid=38235"
Community content is available under CC-BY-SA unless otherwise noted.