This week we interview Vellgar Protostar! 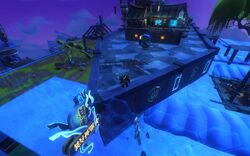 What was the inspiration for your crib?

Well I wanted to create some sort of boat and introduce water some how so I guess I was looking for the challenge and what this would bring. Like most who spend a lot of time in housing though might say, "I just started working on it with what I knew and it just started falling into place and coming together."

What was the hardest part of making your home?

The boat actually. I was able to make most of it quite quickly but once I got to the bottom half of it and started putting the angles in and getting them to make it look like a boat was where it got rough. With the size of the object I was working with to create my boats look there was only so much I could do between rotating and scaling that I finally just had to settle with a 'Close enough...'. Now if I had the same flooring items in triangle form, whole other story lol.

What item or plot were/are you most looking forward to getting?

Im not sure, I like to get creative with my plots and a lot of times I don't like using plugs actually because they get in the way or some have the invisible barriers limiting creativity so I try to limit plots I do to 1-3 plugs. However there was one during beta that I saw that I didn't get a chance to use because I was only a pre 30 beta player but the Helicopter Plug you could actually fly around, I had plans for that thing! Had no idea it wasn't going to be in live.

Of all the Decor items or FabKits you have seen or used, what is your favorite?

It would be the 'Blue Light Lounge Table' Decor item. That thing is so cool, and one of these days I will get around to acquiring enough to do something amazing.

(Not a fan of the 'Blue Light Drinking table', still very cool, but cant build with it, circles are bad in housing, straight edges and squares are so much easier! At least for covering space.)

If you could have one item in your house or on your plot that you have NOT seen, what would it be?

Some way to do water, other than using items that might look close to it. A stream function or water editor, even if there was a limit on it, just some way of adding actual water. I think between my plots I am using somewhere between 20-40 items per plot to cover ground or areas to look like water, be nice if there was some sort of trade off.

If you would like to see your crib featured, head on over to our forum and submit today!
Retrieved from "https://wildstaronline.fandom.com/wiki/User_blog:Pinkachu/Crib_of_the_Week:_Vellgar_Protostar?oldid=38707"
Community content is available under CC-BY-SA unless otherwise noted.