This week we interview Noxxi!

What was the inspiration for your crib?

I wanted to create a place that fits very well for my character due to role play reasons and thus also make it a bit realistic. After knowing my character's healer druid-ish/forest dweller Aurin theme spiced up with a tiny amount of technology in it, so I began to build on this idea. I planned the whole plot for around three weeks, before the game was released to be able to build quickly. I wanted a forest zone that is quiet and peaceful and I wanted to give the impression of being in an actual forest zone and not a floating Protostar housing plot somewhere in the air. The first thing I aimed for was to actually hide the sky, to literally hide the fact that the place is a floating housing plot. My first and basic idea was to simply go and put giant trees at the edge of the plot, so this circle of trees is built from around 50 scaled up giant trees.

I wanted, that when someone visits the place, to immediately feel like they are in a dense forest. 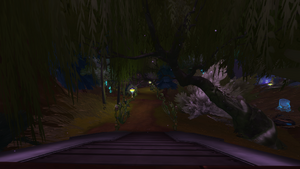 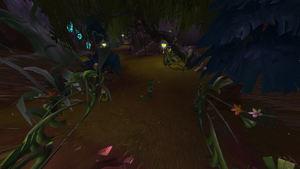 With the forest theme, I wanted to make it a quiet and relaxing place. Also having a character as a "healer" it's a very nice combination. So I had in idea to build a medical station by myself and while I was at it I thought I could put in a massage room in there. Sadly when I actually got to this point in building I realized there was a decor limit so I had to say bye-bye to my other two house I wanted to build alongside with my shed. But the medical station were the most important part of them.

With the relaxation idea I wanted to provide different relaxing spots on the plot for people. So this way I made a bar inside the house for casual talking and drinking or playing card games or darts. I had an idea of a library or more like of a study room or a small office-like room. So with this idea at first I wanted this room in the basement of the spacious Aurin house, but instead I decided to build a second floor in the main room and build it there. In the basement I just simply build my character's room. I also didn't wanted people to wander down to "my" room, so I came up with an idea of building some sort of "door" that I can close.

For the rest of the exterior I wanted to provide additional spots where people can relax or have some fun. At different spots around the house I put down benches if anyone feels like simply go outside and sit down and talk or just to relax. For this I also used a Wishing Well plug so people can sit down next to it and talk, just as any other real place has usually. Since I knew about the hot springs plug back in open beta I knew I will want it, so I was hunting for one for a while and got it as soon as it was up in the auction house. I also built a little dressing spot at the hot springs to be more realistic with it. The last two spot is the meditation spot and my self build tiny dating spot near the meditation spot plug. I was actually thinking of getting the elaborate rock garden first, but as I noticed before, that the meditation spot had trees and bushes too, it was obvious what I will get.

So overall this is what I wanted, no exactly my original plan, but as soon the decor limit will be raised, I will absolutely make my original idea and add them to my plot. 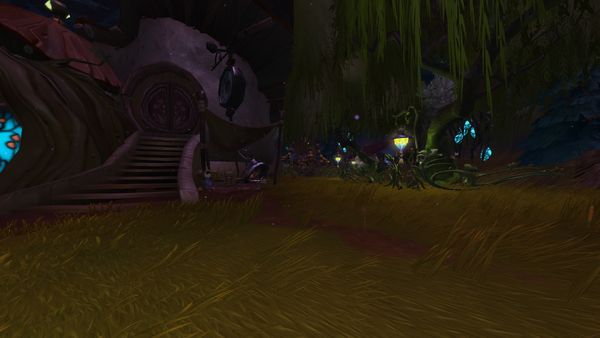 What was the hardest part of making your home?

I would say the trees at the edges of the plot, they took a lot of time to build and also a nice amount of money just for that roughly 50 tree. The second hardest part was probably the medical station I built, it took a lot of time and building the triangle at the roof was quite hard, really had to be precise there and think of a lot of solutions there. The third was the second floor inside the house, but rather the stairs, the room is round and I couldn't figure out what kind of stairs could I build there and how. I tried a spiral stairs too, but there wasn't enough space where I wanted the stairs to be so I scrapped the idea, at the end I built the current stairs, quite simple, but was also a lot of headache.

What item or plot were/are you most looking forward to getting?

Definitely the Hot Springs FABkit and the Meditation spot I was looking for. Also for a lot of different trees/bushes, wooden decors and Aurin styled decors. Currently I have almost everything I wanted and was a key decor/plug for my place. I'm also really looking for a Massive Umbrella Tree, but I can't seem to get it from anywhere, and can't spot it on the auction house, that tree is just too glorious to not have it on my plot?

Of all the Decor items or FabKits you have seen or used, what is your favorite?

The Hot Springs. From decors, probably the Barnacle Willow tree and the Cerulean Skygrowth. But my current favorite decor is the Massive Umbrella Tree, that tree is just B-E-A-utiful.

If you could have one item in your house or on your plot that you have NOT seen, what would it be?

Hmh, good question. Maybe a waterfall decor or something that gives or makes a little river or pool, but as a decor, it would greatly add to the atmosphere. A calm small waterfall with water splashing sound effect, aw yeah!

If you would like to see your crib featured, head on over to our forum and submit today!
Retrieved from "https://wildstaronline.fandom.com/wiki/User_blog:Raylan13/Crib_of_the_Week:_Noxxi?oldid=36135"
Community content is available under CC-BY-SA unless otherwise noted.