The once regal Mordesh’s most brilliant alchemist, Victor Lazarin created an elixir meant to grant his people eternal life - but instead cursed them with a terrible Contagion. Working tirelessly on Nexus, he now devotes every hour to seeking a cure for his people’s affliction.

In 1531 AE, handsome Mordesh prodigy Victor Lazarin graduated with honors from the distinguished Grismaran Academy of Alchemical Sciences.  As part of the scientific elite that had ensured the Mordesh's impending membership into the Dominion, Victor divided his attentions between alchemical pursuits and his new bride Mina.  The birth of their first child Lucy should have been Victor’s happiest moment, but tragically Mina fell ill and died in labor.

Haunted by the death of his beloved wife, he became obsessed with solving the Alchemist's Enigma, the secret of immortality itself.  For decades, Victor delved into the forbidden secrets of alchemy, pushing the boundaries of traditional science. He was driven. He was relentless. And, in time, he believed he had achieved his goal: the Everlife Elixir. Confident of his success, Victor tested it on himself. The results were instantaneous. Wrinkles vanished, hair thickened, teeth regrew. It seemed Victor had attained the unattainable. Within months, almost every Mordesh on Grismara had taken the elixir.

But the miracle was short-lived. Within months, it became increasingly clear that the formula was unstable.  Radiant, unblemished skin became mottled and decayed, and the afflicted soon fell into a mindless, cannibalistic rage. In his very last moments of lucidity, Victor created the Vitalus Serum, a temporary defense that suppressed the Contagion’s degenerative effects and kept the madness at bay.  Distributing the serum to the last remaining survivors on Grismara, Victor saved his race from oblivion.

After joining the Exiles, Victor’s efforts were critical in curing several epidemics throughout the fleet, helping the Mordesh gain acceptance among those unsettled by their cadaverous appearance.  Now convinced that Nexus holds the secrets to life and death, Victor hopes that someday he will discover a cure for the Contagion and reclaim the forgiveness and trust of his people.

During his time in Blighthaven, Victor Lazarin and his daughter Lucy Lazarin were researching on a new batch of Vitalus Serum that might possibly stop the new strain of Contagion with the materials in that area. His experiment showed promises of sucess that he let his daughter to become the first test subject for his serum. The tragedy struck when the Entity discovered their laboratory and attacked the research team, which Lucy Lazarin was infected by the Strain that transformed her into a mindless monster. After witnessing the loss of his only child, Victor Lazarin broke down until he meditated at the safe place. Later, he recovered from his mental breakdown and promised to find the cure for the Contagion. 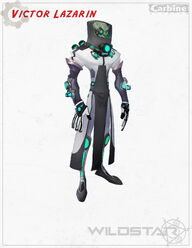 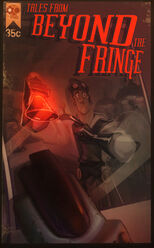 Pre-Contagion Victor Lazarin
Add a photo to this gallery

Retrieved from "https://wildstaronline.fandom.com/wiki/Victor_Lazarin?oldid=38158"
Community content is available under CC-BY-SA unless otherwise noted.