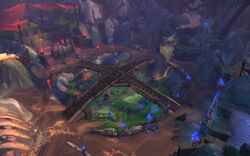 In Walatiki Temple two teams try to obtain ancient relics while battling to the death! Buried deep in the jungles of Nexus, the mysterious Walatiki Temple holds a number of magical Moodie masks, infused with the arcane powers of the diminutive Nexus natives. As each team searches the temple to find these valuable relics, they will have to fight the opposing team on its rickety wooden walkways and rune-etched walls. It's Archaeology 101 - to the death!

Walatiki Temple is the first Battleground you’ll unlock (at level 6) and is a play on the classic “Capture the Flag” game type. If you’re not familiar with Capture the Flag (or CTF), two teams compete for control over an object (in this case a Moodie Mask) that they need to bring back to their base to score a point. In our map type, whomever carries the mask is also at a bit of a disadvantage (slower movement, unable to sprint, and using movement abilities like Leap or Pounce causes you to drop the mask).

Walatiki differs from the usual CTF gameplay in a couple of ways. Each team begins with one mask already in their base, with “neutral” masks spawning over time in the central area. Players can also *steal* masks from the enemy base and bring them back to their base! These two elements not only enhance defensive play, but also require players to consider the larger game field and not focus only on one or two areas.

Each base has a cave near the entrances, which allows the player an alternative route to steal or defend masks.

Retrieved from "https://wildstaronline.fandom.com/wiki/Walatiki_Temple?oldid=10927"
Community content is available under CC-BY-SA unless otherwise noted.