Once you have reached level 50, you will be able to purchase a Warplot on a floating island. It will be up to you to build it up into a battlefield. Items for your Warplot can be gained through raids and adventuring. Defeated raid bosses can be added to your Warplot but will be a significantly weaker version of their former selves.

Once your Warplot is ready for battle and you have created a WarParty comprised of 30 players, you can initiate a war against another WarParty via a matchmaking system. Once two Warplots have been chosen, they will be instanced within range of each other and the battle will begin.

Each team starts with a fortress that they can upgrade and customize with a vast assortment of modifications using special currency called War Coins.

Victory is achieved by either destroying the enemies’ generators or through killing players and disabling structures. At the end, both teams are rewarded with Loot Bags, Prestige, and Elder Gems.

Where do you hit your enemy War-plotees where it hurts most?

Their generators! Much like everything else, fortresses run on juice, so blast both their generators for the quick, humiliating TKO. Taking these intricate structures offline is a highly technical process that requires a thorough grasp of nuclear – aah, hell with it, just shoot 'em!

The Most Exciting Word in Warfare: Attrition! If your foes are being mama's boys and girls about their power grids, or you just want to drag things out for your sadistic amusement, then it's time to get old-school and just take 'em down one (or more) at a time. You can also deplete their overall energy supply by whittling away at their upgrades, and better yet, kill them!

What's Nano-Pak? Only the greatest nanotechnology resource since sliced atoms! Nano-Pak is the stuff that your team uses to initiate all plug abilities, from firing superweapons to calling in reinforcements. It’s like money, but odorless unless inhaled. Outside of enemy skulls and beer, it’s probably the most important resource you’ll ever amass.

There are 8 plugs on each Warplot. 4 Large rectangular shaped plugs, and 4 Small square plugs. Each of the plugs may have one of the following modifications plugged in to it, assuming you have the required amount of War Coins, and have acquired the corresponding FABkit.

Installations are the upgrades to your base. They keep enemies from getting in and eviscerate those who do. From Chompacabra Pens to Murderbot Factories, everything you install into your fortress says something about you to your foes… and that something is: Ha ha, you're dead!

What's great about deployables is that you can drop 'em practically anywhere. Bear traps, bug bombs, web cannons, land mines -- there are so many ways to hurt would-be trespassers, you'll never need a garden gnome again!

View from center of the Warplot

Another view from the center. No upgrades placed yet. 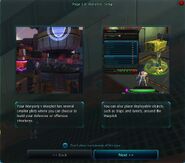 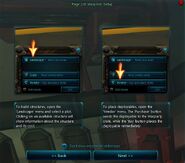 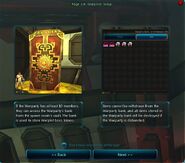 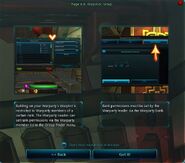 Reinforced Communications Tower for Warplots
Add a photo to this gallery

WildStar - Warplots Trailer
Add a photo to this gallery

Retrieved from "https://wildstaronline.fandom.com/wiki/Warplots?oldid=41576"
Community content is available under CC-BY-SA unless otherwise noted.