Warriors are unstoppable juggernauts on the battlefield, using a combination of heavy weaponry, powerful armor and advanced technology to take care of business.

Fearless bruisers that give as good as they get, Warriors are at their best when charging into the fray. Equipped with a heavy battle suit, and armed with a giant power sword and a plasma blasting arm cannon.

For ages, warriors throughout the galaxy would slice and dice their enemies with swords, only inevitably to find themselves confronted with something uncuttable. But then someone came up with the crazy idea of hooking a blade up to a fusion accelerator. The result? A marriage made in slaughterhouse heaven. Today's power swords come equipped with ten megatons of liquid awesome hurtage. In. Your. Fist.

Think last year's Thermo-Nuclear Battle Gauntlet was the last word in extremity extreme? Well, stop thinking and listen, because this year we're talking the XL45 Hell Mitten: a supercharged deathgrip that'll have your enemies singing soprano for the rest of their three-second lives. This bad boy comes stocked with something for everyone to die from: a high-velocity ripsaw, 40M retractable battle harpoon, instant-activation riot shield, personal defense plasma barrier, and high-explosive destructo-missiles. Oh...and GPS. This ain't your gam-gam's battle gauntlet!

Enough with the techno-yadda-yadda, egghead...Tactics are for wimps. In the end war's all about two good old-fashioned pastimes: ass-kickin' and face-stompin'. Which one you do with the back of your hand and which comes courtesy of your size 30 boot is up to you, ace.

The warriors' class-based resource is Kinetic Energy (KE). Kinetic Energy has a maximum value of 1000KE, which the warrior generates by executing builder abilities. Kinetic Energy also gradually decays over time while both in and out of combat. Many of the most powerful attacks and abilities in the warrior's arsenal are only possible after reaching thresholds of Kinetic Energy (usually at 250KE, 500KE, 750KE, and 1000KE).

A look at the warrior abilities UI from the official WS twitch video.

Up to date LAS window with Warrior abilities.
Add a photo to this gallery 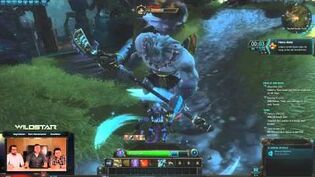 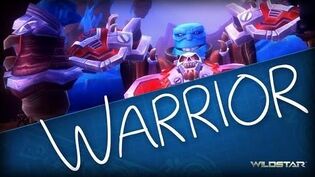 Retrieved from "https://wildstaronline.fandom.com/wiki/Warrior?oldid=41167"
Community content is available under CC-BY-SA unless otherwise noted.